Webcasts Not Worth Watching 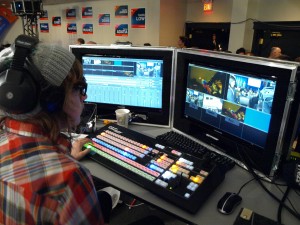 I couldn’t stand it any longer. I bailed.

A few weeks back, I signed up to view a webcast on a topic I was very interested in. I tried really hard to watch it and to be engaged….but five minutes was all I could handle.

What could possibly have been so bad?

Hmmmm…where to start? Well, the screen size on the website was too small, so I expanded the view…..but the resolution was not enough to support a full screen view. Hmmmm….forced to watch on a tiny screen. That would normally not be too bad, but this webcast had only one camera to cover a panel of six people and a very large screen for their power-point slides. It was static wide camera shot. Everything was very tiny in that tiny screen.  It’s really hard to be engaged by a speaker when you can’t see their face because it’s so blurry. And frequently a speaker would say: “As you can see on my power-point….” No I couldn’t. The screen was over-exposed and was almost white. Anything I might have been able to read was in such tiny text that I couldn’t see it on my tiny screen.

The most surprising part of this story is that the webcast was from a live conference on streaming video and television on the web.

Are you thinking of putting together a live webcast? Are you looking at what you should budget? The things you need to invest in FIRST are those things that create ENGAGEMENT. Consider these tools to engagement:

Anything less, any less engagement and you’re taking a risk of wasting your investment and possibly damaging your reputation. The impression I was left with from the organization that did the poor webcast wasn’t very good. I’m not really interested in viewing future webcasts or going to their conferences because they just didn’t do a great job of getting me to stick with them.

So, before you spend a dollar on your next webcast, it’s worth spending some time to think about how you’ll keep your viewers by keeping them engaged.