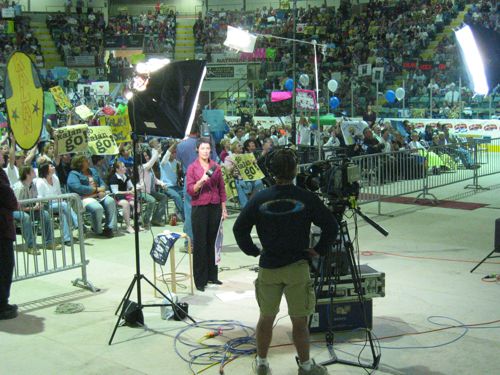 Once upon a time, corporate communicators prepared thoughtful messages and delivered them to their stakeholders through one-way channels: in printed brochures, through faxes, on static websites. In this golden age, customers didn’t talk back when we sent out press releases. Competitors couldn’t undermine or twist our messages in public forums.

Social media has changed all that. And while it can be daunting to think that Twitter, Facebook, and other social media platforms may open up our businesses to public critique, the same tools also can open the door to public accolades.

The key is to take charge of your message.

Video can be a powerful voice in this unregulated discourse, particularly when your company’s actions or decisions come under attack. Here’s why:

* Consider: if you respond to public criticism of your company by sending a written press release through the traditional media, news journalists will frame your message in whatever context they choose. When you create a video for distribution through social media, the audience receives your message in your words and context.

* It’s easy for critics to side against a “faceless” corporate entity. By putting members of your team in your video, you can humanize your company and help audiences connect with the real people in your organization.

* Words alone may not win others to your side. Video can create a compelling testimony by packaging the facts with images that underscore the message. While a fully truthful and transparent presentation of the facts is essential, the social media realm is unlike traditional journalism; there is room to show your feeling for the issues and your company’s stake in the outcome. Ultimately, a storytelling narrative is far more engaging than a dry articulation of issues.

* If your company has been unfairly criticized, a video message can demonstrate how your detractors manipulated the facts—and set the record straight. We’ve all seen examples of this in pre-election political messages. Don’t stoop to your critics’ unethical methods, but don’t stand silent, either, while snipers—often adept in social media—take shots at your corporate reputation.

* In addition to winning over your public, using video to document the falseness of a detractor’s claims may have a secondary value should you require documentary evidence for a future legal claim.

* Don’t just tell your audience—show them with video. If a competitor falsely claims that your super-industrial carabiners weaken in sub-zero temperatures, hire a videographer. Film your team using the clips in mid-winter—to suspend a snowmobile, a bull-mastiff in a Christmas sweater, a kitchen sink—and invite your customers to share similar photos and video for possible prizes. Used properly, humor can be very effective in social media.

* Finally, when your company is in the wrong, take responsibility. The best damage control can be a sincere, heartfelt video apology that takes stock of the situation and outlines how restitution will be made. To err is human; to accept accountability, divine.